[Mom says she is a surrogate baby.] At first I thought I was adopted, when I was 2 I thought, “I don’t look like either of them”. I really feel like I might have been adopted because I’m the only one in the 2nd grade who’s a surrogate baby. [O: she is baffled by the logistics of it, but more by the feeling that she is different which means she might not be loved.] First I thought they didn’t care about me when I broke my arm, because for a couple of seconds they didn’t react. I don’t get why (enter birthmom’s name here) gave me to you and dad, it’s like “Free baby, 12 cents.” It’s sort of like she was trying to give me away because she didn’t want me.

I went to this doctor who took meticulous notes. The above is an excerpt from them of me speaking. If I remember correctly the doctor wanted to move into the psychology field at some point so she seemed to “practice” by documenting these interactions. I’m so glad she did as I find everything she wrote about me to be fascinating. I was 7 when these notes were taken and, besides for a couple of poorly written diary entries, I don’t have strong insight into how I conceptualized surrogacy at this age. Finding these notes felt like someone shining a light on my mental and emotional state then.

I find it particularly interesting that surrogacy came up at all as that wasn’t remotely close to why I was there. Even more intriguing, this topic makes it onto the first page of notes which shows how early into the interaction with this doctor I brought this up. Reading over these notes, I can feel my own intensity and person spilling out into the room. I can see my thoughts racing as I speak in the same way they do now as an adult when I become passionate about a new idea or insight. My mom described this visit to the doctor as one where I was nearly manic — the doctor notes this as well:

She talks fast, nonstop, won’t let me get in a word or a question.

It reminds me of how I felt when I went to therapy for the first time. I just gutted myself willingly pouring out every thought I could manage in the allotted 50 minutes. I imagine this is why surrogacy came up with this doctor. She likely said something that made me feel safe enough to unleash how I felt. Outside of therapy or a phone call with my mom, I don’t feel I can empty myself like this otherwise. Ironically, this need is what led to me first starting a private blog on blogger with a friend. This experience led me to WordPress in college and led me to working for Automattic later. It’s odd to think about how I got to where I am today with this context in mind — I could have so very easily turned left instead of right.

This build up happens less now as I have learned to not let things build up until I must word vomit. I still am known for a good rant or two but, in the whole scheme of things, I’m more even keeled.

I just realized I dropped that first quote in there from the notes without properly addressing it. I do that often with surrogacy – I can pick the topic up and drop it rapidly without much effort. This is a coping mechanism as otherwise I think it would turn into something underpinning every thought.

Reading the quote over, I’m struck by how self aware I am that I am a surrogate baby and that no one else is. I’m able to properly understand that I wasn’t adopted in the traditional sense though. For a 7 year old that feels like a substantial realization. I wonder if I felt lonely or isolated? I wish I knew more. It also stands out to me how quickly I assume “they don’t care about me” because they didn’t react as I expected they would have when I broke my arm. I can’t speak with certainty but I can’t imagine many kids would make that massive leap.

The first time I read “Free baby, 12 cents”, I busted out laughing. It feels like an absolutely absurd statement. It wasn’t until I read it over again that the pain hit me as the statement wasn’t made to be funny. I said it with unwavering innocence and sincerity – I truly wanted to know. I feel for my 7 year old self and how confusing this must have been. I can see my little brain and heart trying to make sense of it all. I think it’s why I saw every interaction as a reflection of my worth and whether my parents cared for me. Later in the notes, this crops up again:

Right now she’s mad because mom forgot to put her clothes out for her last night; “does mom love me?”

It’s obvious looking back that I felt incredibly insecure in my standing with my parents. Can you tell the psychology major in me is having a field day? I love this even though it is painful to read over. I wish I could reach back out into the past and scoop my little 7 year old self up into a hug. I was so obviously hurting and confused.

It’s sort of like she was trying to give me away because she didn’t want me.

The “sort of like” part of this sentence is the most important part as even at that age I knew that statement was false. I spoke on this more coherently in a more recent interview:

Being a surrogate baby is basically like half being adopted and half being a stepchild without any drama of a divorce. It leaves you in a weird place because you have some angst of “why did my mom give me up” but not nearly to the extent that you do if you were adopted. The angst that is there as a result often goes away when you release how selfless it was to do. However, you do feel a bit like a stepchild in that you aren’t fully related to one of your parents (at least for my kind of surrogacy). BUT you were so wanted by this parent that they planned for years to have you! As a result, it’s this weird mix of more common social norms in our society that leaves you feeling both like you have people who “get it” yet still a bit alone. I’ve balanced it by realizing as we all do that there will be very few if any people who totally get your story. There are some friends who I can talk to about my sexual identity but who may not understand the surrogacy/family side and vice versa. Fortunately, I have a variety of people who I can turn to for different things and, ultimately, as a collective group of people I have never felt alone in this.

I called my mom tonight as I’m working on bringing everyone together in my surrogacy story for a sit down interview with an author who is writing a new book on modern families. My parents have been so passive and nonchalant about the whole thing that I quickly got frustrated talking to my mom about some of the details. I wanted her to have SOME opinion rather than a “whatever works” attitude. It’s almost like I wanted her to object to show she had thought deeply about this meeting but her open ended attitude left me feeling like she wasn’t really thinking the whole thing through. As the conversation continued, I calmed down as I started to understand that surrogacy just isn’t a part of their every day life like it is mine. The president of the surrogacy agency my parent’s used said this to me when I met with her last year: “Surrogacy is your story until your child comes into the world. At that moment, the story is theirs.” I didn’t fully appreciate perspective that until recently.

In many ways, I get this perspective. They basically used a fertility technology to get something they wanted: me. Being a product of this technology though has left me inextricably tied to it — it truly feels like a part of me. It’s similar to how I feel about being LGBTQ. It becomes a forced larger part of my identity than someone who is heterosexual because it’s not the norm. My parents can walk away from surrogacy while I don’t feel I have that option. I can’t stop my ears from perking up at the mention of surrogacy or fertility problems. Surrogacy is my alert word like “alexa” is for the Amazon echo.

Despite this new perspective, it still blows my mind how relaxed my parents are about all of it. How could they PICK someone to do this massive thing? How could they look into surrogacy starting in 1988 when the Baby M case had just happened in 1986? What about my birthmom’s profile made her know that she was the right choice? I asked my mom tonight if she ever asked for a second opinion when choosing my birth mom. She quickly said “nope”. I was incredulous – “You didn’t even call your mom?! I can’t imagine not calling you. What about your sisters?” My parents just casually made the decision after looking at little more than a handful of surrogate profiles. I can’t even make a decision about who to date in today’s world of dating apps like that yet they were willing to choose who would HAVE THEIR BABY (and make up half of that baby’s genetics).

My parents said they looked for “smarts” on the profiles. This was over an hour into the call and I joked, “I’m sure you are massively regretting that decision right about now so you wouldn’t be stuck with such an inquisitive kid”. We both laughed. It’s strange to be able to joke about things like that. Most kids are brought into the world with little question about why they are the way they are. Meanwhile, I question why I am the way I am constantly. Why did my parents choose a white surrogate over someone of a different race? Why did they choose someone short instead of tall (height is controlled by multiple genes but still)? Why? Why? Why? I can’t shake the questions and I can tell my 7 year old self couldn’t either. She has morphed into a more articulate yet no less curious adult.

On a lighter note, this also made it into the notes:

She was Indiana Jones for the past 3 Halloweens. 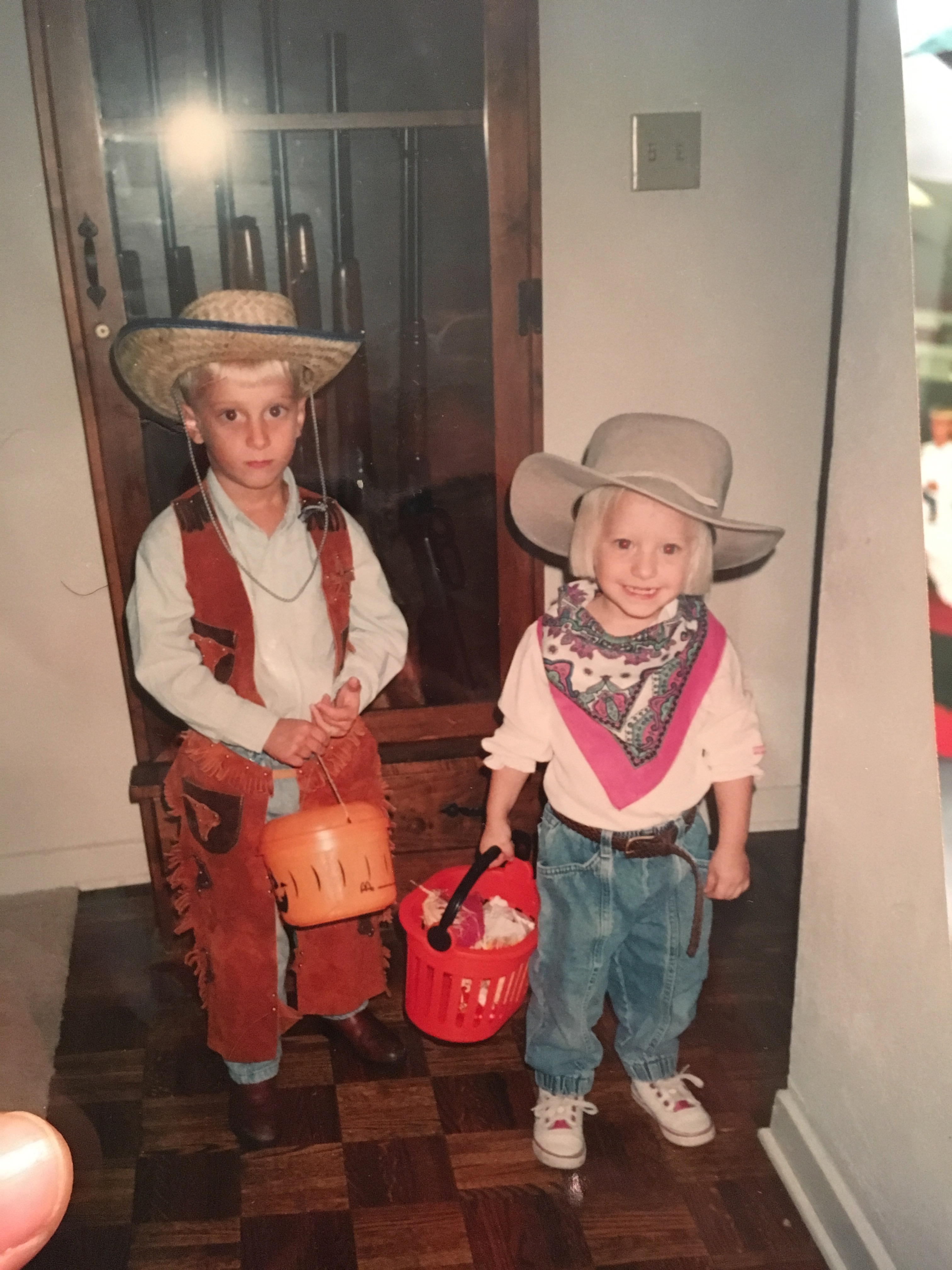