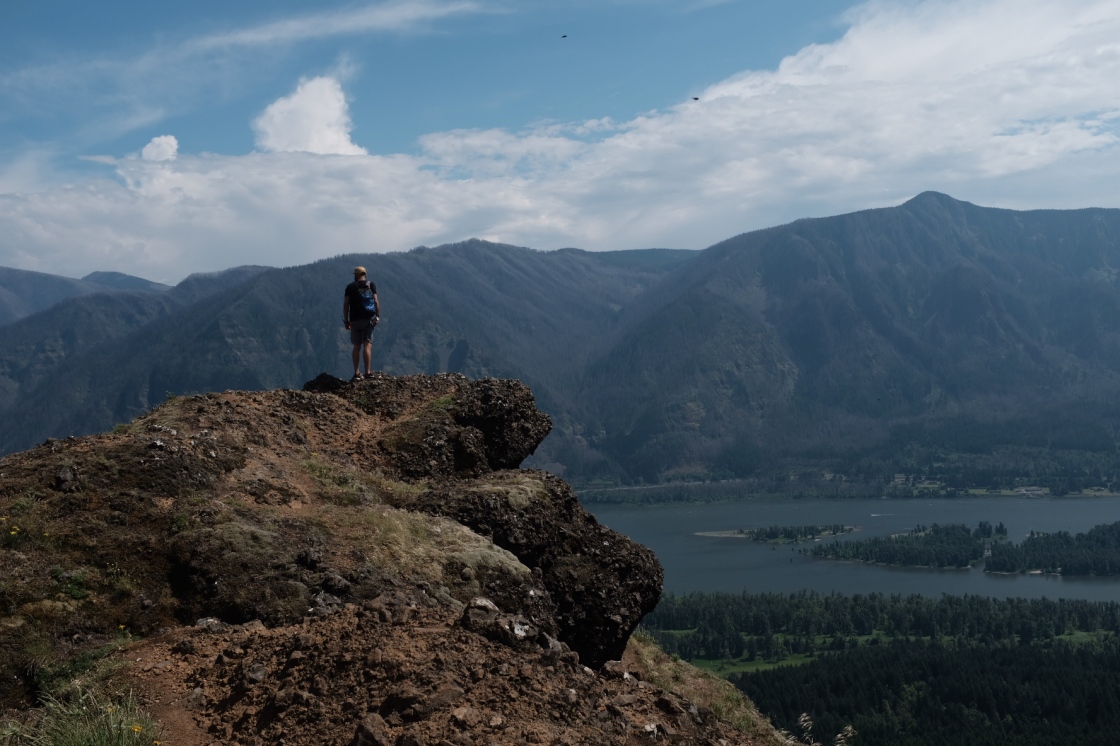 I had the most unexpected day. I dragged myself out into nature after wanting to just finish up work and succumb to Netflix reruns. Instead, I went on a splendid 10 mile hike on a ridiculously gorgeous day and made new connections with three incredible women. They misgendered me when I first passed by them on the way up the mountain. When I reached the top, I paused to eat, hydrate, and decide my path back down. I’m notoriously bad at hydrating and fueling my body regularly so I had promised myself I would take an extended break once I reached the top.

I stopped long enough for them to catch up. As they arrived, I picked up my pack with the introvert in me kicking in. It was too late – they suddenly were right there on the trail.

We chatted for a bit about which way to go down only to realize none of us were from the area and this was our first time on the trail. We had heard from another hiker that it was “easier on the knees” to go down the longer route. I was less concerned about my knees and more concerned about my very unstable sambas worn thin by daily use for the last year (I’m so close to a hole breaking through the sole of my shoe).

I had an intense moment of realization – why am I in a rush? I had put 6 hours of work in already and only needed to do minor wrap up upon returning which would take 2 hours at most. I had worked hard this week and today was my last day in the PNW. When this realization struck me, I turned to them and said, “I’d love more time outside anyway – let’s go the long way.”

As we walked, we talked. At first, we touched on the basics – “Where are you from?”. Amazingly, one of the women had a house in the VERY small hometown where I grew up in Florida. Her house is right next to the elementary school I went up to. “I bet we know a lot of the same people”, she said. During this conversation, I found out they were all doctors pioneering in their unique field. As luck would have it, I had just read this article called “Why Doctors Hate Their Computers” (I’m a bit obsessed with how tech bleeds into other industries and the results of that). I began telling them briefly about the article and asking them to share their own perspectives. This spurred each of them to talk nearly in tandem about burnout, how the technology was a distraction, how this wasn’t what they signed up for, and how they worry about the future. As we stood at the top of the mountain staring out in the gorgeous views in front of us, we chatted incessantly.

Around this time, I found out the same doctor with a house in my hometown knew the mom of a dear friend I played soccer with for 10 years. At this point, I had subconsciously decided I’d be making my way down the mountain with them. We later took a picture which she quickly sent off to our shared connection. It felt like fate.

Along the way, I learned about why they were called to such a unique field of medicine. They each had different stories and shared them excitedly. I heard about their kids, the places they lived, what keeps them going, etc. About halfway through, the topic of genetic testing came up which led us down an unbelievable path I only wish I could recount but refuse to out of respect for the sacredness of what was shared. Needless to say, I feel a tiny bit less alone today than I did yesterday.

Life seems to know when I’m getting worn down. I’ve hardly reached out to anyone the last week or so. I’ve enjoyed siloing myself away. Today broke me of that as question after question poured out of me and I excitedly got to know three, 50 something year old bad ass doctors. This always happens. Right when I think I’ve somehow moved passed needing other people day to day, I meet some incredible human who reminds me how wonderful it is that I care to ask and get to know others.